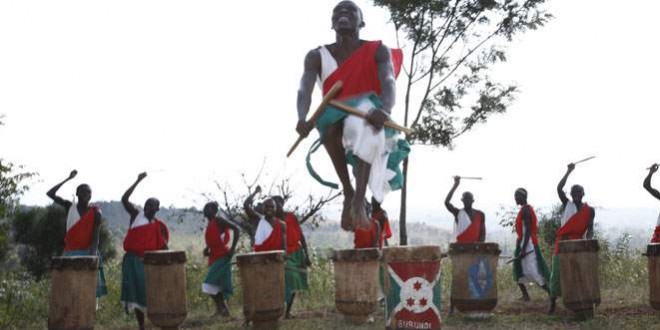 Bujumbura: Burundi’s capital city, lined with palm trees and Art Déco buildings, has long been a place where Burundians could go to forget their troubles, and that tradition remains strong. Sample the French- and Belgian-inspired fare at the city’s many excellent restaurants, and boogie down at the famously late nightclubs.

Les Tambourinaires de Burundi: Seek out a performance of the country’s most famous, high-energy drumming troupe, which has traveled to places as distant as New York and Berlin.

The Intore Warrios, Kirundo: The warriors of Umwami (King) of ancient Burundi did not always have the same name; those of the first army set up in the country to defend the king against the internal rebellions or the external attacks were called ‘Intore’. Others were called ‘Ibirima’, ‘Amasuka’, ‘Abadasigana’, etc. according the symbolic representation of the valor or boldness of the warriors.

The ‘Intore’ dancers kept this military parade formerly executed by the royal warriors, back from the battlefield, to express their bravery before a delighted population awaiting them, in the presence of the King.

Dressed in leopards’ hides, and wearing a kind of wig with long sisals on their heads, a string of bells on their ankles, a necklace (in ivory), and holding a lance in the right hand and a object standing for a shield in the left hand, the dancer performed gracious movements following the rhythm of the sound of the horn of antelope, whistling and drums, in a deafening racket proper to the warrior terror. The movement of the dance changes constantly depending on the content of the poem proclaimed by the leader who organizes the show.

Today, this performance is executed during official ceremonies of the nation, as it is for other performing groups. Nevertheless, one should notice that three male dances (Drums, Agasimbo, and Intore), kept an official mark based on the ancient kingship, now become shows on official events. This historical dance is one of the attractions at northern lakes of the country, near the administrative centre of Kirundo.