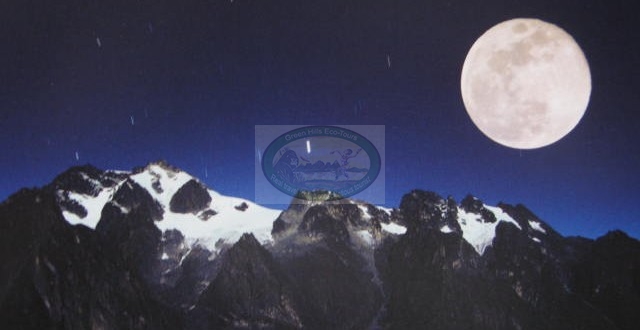 The fabled “Mountains of the Moon” lie in Western Uganda along the Congolese border where the snow-covered equatorial peaks rise to a height of 5,109m and the lower slopes are blanketed in moorland and rich montane forest. Most of the park is accessible only to hikers although the magnificent scenery and 19 Albertine Rift endemics would be ample reward for Birders.

The national park hosts 70 mammals and 217 bird species including 19 Albertine Rift endemics, as well as some of the world’s rarest vegetation.

The equatorial snow peaks include the third highest point in Africa, while the lower slopes are blanketed in moorland, bamboo and rich, moist montane forest. Huge tree-heathers and colorful mosses are draped across the mountainside with giant lobelias and “everlasting flowers”, creating an enchanting, fairytale scene.

Location and Size: In the West near on the border of the Democratic Republic of Congo.

The Nyakalengija trailhead are 22km from Kasese off Fort Portal road. Arrangements can be made before you travel. Contact us for more.

Mountaineering and hiking, Bird watching of over 195 species and Nature guided tours through all the vegetation zones at the glacial peaks.

January-Febraury and July-August are the driest months, but rain is possible due to unpredictable seasonal changes.

Did You know Rwenzori National Park?

•Highest point: 5,109m above sea level on Mt Stanley’s Margherita Peak. Mt. Stanley is bisected by the border with the DR Congo.

•The Rwenzori is not volcanic like East Africa’s other major mountains but is a block of rock up faulted through the floor of the Western Rift Valley.

•The Rwenzoris were christened the “Mountains of the Moon” by the Alexandrine geographer Ptolemy in AD 150.

•The explorer Henry Stanley placed the Rwenzori on the map on 24th May 1888. He labeled it ‘Ruwenzori’, a local name which he recorded as meaning “Rain-Maker” or “Cloud-King.”

The Rwenzoris are a world-class hiking and mountaineering destination. A nine- to twelve-day trek will get skilled climbers to the summit of Margherita – the highest peak – though shorter, non-technical treks are possible to scale the surrounding peaks.