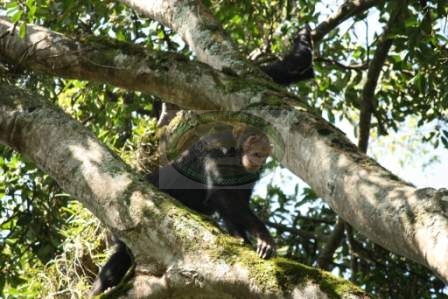 Located in the southern sector of Virunga National Park, west of the park headquarters of Rumangabo, Tongo is a unique forest island and home to a small population of chimpanzees. The forest lies on one of the lava flows from Nyamulagira Volcano and is estimated to be 300 years old. Chimpanzee Treks Opening in January 2012

Beginning in 1987 and continuing for two years, the Frankfurt Zoological Society (FZS) developed a network of 80 km of trails inside the Tongo forest and worked to locate and habituate the estimated 50 chimpanzees. In 1989, tourism officially opened, providing guests with the only area of habituated chimpanzees for tourism without the use of artificial inducement. Tourism grew until 1992 providing important tourism revenue for park management and benefiting the small rural community of Tongo

In addition to Chimp viewing, tourists can visit the Chimpanzee Resource Centre at Tongo, see a presentation on the project and learn of the community’s involvement in protecting the park, as well as the various development projects they are undertaking. Tourists can also hike to the crystal clear waters of Tongo’s rivers and pass by large pits full of poisonous gases, and a graveyard for wildlife.

Lodging options include from high-end Mikeno Lodge at Rumangabo to the Sokomuto basic campsite. A local land-owner and long-time supporter of the park will soon be rehabilitating his lodge which offers stunning views over the Tongo forest and volcanoes.