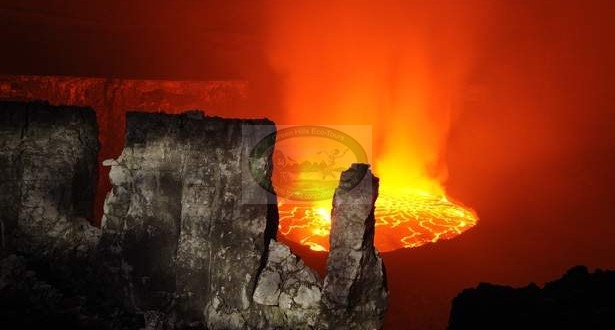 At 3,470 m, Nyiragongo, one of the world’s most beautiful and active volcanoes, towers above the thick jungles of Virunga National Park. Nyiragongo is a large stratovolcano. This type, also known as a composite cone, is the most picturesque of the volcano types with gentle lower slopes that rise steeply near the summit, and then break to reveal the smoking caldera. A five-hour hike to the rim of the 1.2 km wide crater reveals the fiery lava lake deep inside. In the center of the crater is the world’s largest lava lake. Sitting on the edge of thecrater at night, the red boiling lava and smoking caldera will mesmerize the visitor. It is so bright that on a clear night, the glow can be seen not only from Goma but also from Rwanda

The trek includes a walk through lush forest and lava fields with a steep incline near the top, and includes an overnight stay in the Nyiragongo Crater Shelters on the volcano rim.

In the most recent volcanic eruption of 2002, a fissure opened on the south side of the volcano sending a lava flow toward the city of Goma, covering one-third of the city’s airport runway, and reaching Lake Kivu.The professional Tour Guides from Green Hills Ecotours will offer you the best tour exploring and learning more about this unique active volcano.

The stunning views both day and night make this an unforgettable experience.